In a nutshell, the new feature allows users to simply type out what they want an image to look like with a short prompt, and the AI does the rest. That’s right – all you need is a bit of imagination and to express it in a few words, and within seconds, you can have an original,  high-resolution visual to work with using the mobile editing tools that have made Lightricks’s apps go-to tools for professional and aspiring content creators.

We all know the power of images, especially when used by social media creators to grab attention. The right visual can tell a story, evoke emotion, and capture a moment in time that can be shared and remembered for years to come.

However, unless you are a trained artist, a professional photographer, or you have access to extensive stock photo libraries, it’s unlikely that you have the skills to create truly stunning original images on your own. In this sense, the new rollout from Lightricks represents a significant change for creators.

So, what exactly is this new feature? For example, let’s say you want to create an image of a sunset over a beach. All you need to do is type something along the lines of “sunset, beach, waves” and the AI will generate a range of images for you to choose from. And if you’re not happy with any of the options, you can simply tweak the text input and give it another whirl. 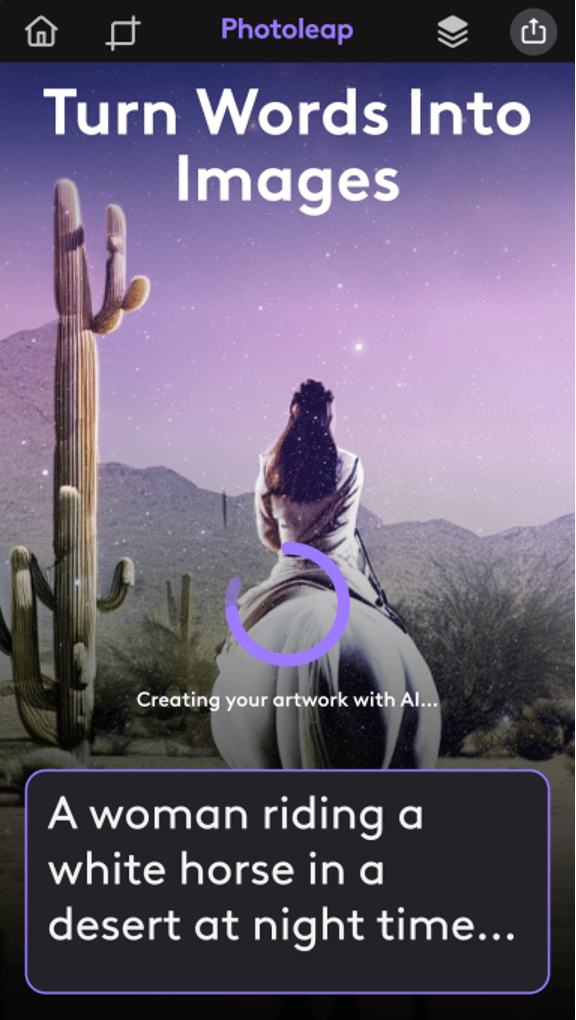 Lightricks is not the first company to deliver a text-to-image AI service, but they are the first to do so through a mainstream mobile application that anyone can use to further manipulate the AI-generated visuals and incorporate them into other designs.

While text-to-image AI solutions such as Dall-E and Midjourney have certainly captured the attention of the tech media, they are more exciting for their potential than any specific implementations. These are code bases which may one day be incorporated into various applications for any number of use cases.

While both solutions have been praised for the quality of the images they output, they both require a certain level of technical know-how to set up and use, which cuts them off from a large chunk of would-be content creators. Today, to use Midjourney, for example, you need a Discord account and to connect it to the AI’s chatbot. Dall-E mini is available as a minimalist web app called Craiyon. Neither offers native support for editing the generated images.

Aside from an experimental video background generation feature that some TikTok users have reported seeing, no mainstream mobile app has offered users the ability to use text-to-image AI in the context of common visual creation workflows, which is what makes Lightricks’s announcement such a watershed event.

Some of the Jerusalem-based company’s most popular products include Facetune, Videoleap, Photoleap, Beatleap and Filtertune, which have been downloaded over 500 million times collectively. But in the past year, Lightricks has made significant strides in diversifying beyond its original mandate of simply offering tools for creators to edit visuals, with the goal of becoming a platform for everything creators need to unlock their potential.

“We are working to lower the entry bar for creators, giving all creators access to our tools and services, and providing opportunities for them to quickly and easily connect with platforms or brands looking to collaborate on unique campaigns,” said Zeev Farbman, CEO and co-founder of Lightricks, in an interview earlier this year.

“We embrace the idea that anyone can be a creator, and strive to make our apps and services accessible to all creators across the spectrum,” he continued.

In June, Lightricks unveiled a new version of Videoleap that allows creators to share video templates via a newsfeed-like discovery engine. In March, the startup announced that it had acquired Chicago-based Popular Pays, a service that connects creators with brands for sponsored content opportunities.

Generally speaking, one of the most attractive benefits of text-to-image AI is its ability to help unlock creativity. After all, with this technology at your fingertips, the only limit is your imagination, not your technical ability. However, it’s not just content creators who stand to benefit from text-to-image AI.

This technology also has a wide range of potential applications across a myriad of industries. For instance, text-to-image AI could be used by architects to quickly generate 3D models of their designs. Or, it could be used by fashion designers to create digital mood boards for their collections.

Take product design as another example. A company looking to create a new line of shoes could use text-to-image AI to generate images of different design concepts. This would not only save the company time and money, but it would also allow them to quickly iterate on their designs until they find the perfect combination of form and function.

In the marketing world, text-to-image AI could be used to create realistic mockups of advertisements. This would give marketing teams the ability to test out different ad campaigns without needing to invest in and rely on graphic designers. Additionally, it could also be used to generate images for social media posts, email newsletters, and even website banners.

And last but not least, text-to-image AI could have implications for the field of education. Teachers could use this technology to generate images to accompany their lesson plans. Or, students could use it to create visual aids for their presentations. The possibilities are endless.

It will be interesting to see how Lightricks’s 29 million monthly active users make use of the new text-to-image AI feature – and how other app developers tackle incorporating these types of engines over time.