Traditionally these construction methods have varied in popularity by country and have experienced waves of adoption. Until recently, the perception of prefabrication and modular construction has been generally negative, with the quality of craftsmanship considered poor. Today, the potential benefits offered by prefabrication and modular construction are being recognized, combined with advances in technology and craftsmanship enabling more complex designs and the use of better materials.

Previously architects and engineers relied on 2D technical drawings done by hand or through computer aided design to develop components and oversee project construction. This resulted in many errors, that were typically recognized when prefabricated components or modules are transported to site for installation. Errors, particularly this late in the construction process, can cause significant delays and increase costs as those elements may need to be altered or produced again. This has knock on effects to the rest of the build schedule.

Today, Building Information Modelling (BIM) (see also the 3D Infrastructure Modelling and BIM use case) is being used in conjunction with these construction methods, to ensure that the prefabricated components or modules will fit together as intended once installed on the construction site. BIM enables the project to be built virtually before being physically constructed, which can eliminate many of the issues or inefficiencies that can arise during the construction stage. Utilizing this technology can give new life to prefabrication and modular construction by enabling more complex designs, improving communication and coordination between stakeholders and ensuring the structures are built to a high quality.

Prefabrication and modular construction can improve construction efficiency and reduce costs in part due to their production line nature. Like factories, the prefabrication companies focus solely on these tasks, and will typically produce the same product multiple times to be shipped to different construction sites. The repetitive nature of the tasks enables them to work more efficiently than an on-site tradesperson who would have to tailor his approach to the worksite in question. This method also enables a reduction in material costs and wastage as they can purchase materials in larger quantities, thereby reducing the cost per piece, and can use any surplus for the next project, thereby reducing waste and the cost associated with waste.

Autonomous machinery can optimize the performance of repetitive tasks such as those involved in the prefabrication and modular construction methods. Both off-site in the specialised facility, and at the construction site, autonomous machinery such as robots and cranes can perform tasks in an efficient, consistent and reliable way. The use of these machines can reduce the time to perform tasks, reduce the risk of damage to building components and other equipment, reduce the risk of workforce injuries by distancing staff from potentially dangerous activities and can ultimately enhance the facility’s capacity. All of these will result in cost savings. Increasingly, artificial intelligence (AI) can also be used to undertake more complex tasks.

By combining these construction methods with an effective modelling tool, engineers can access cost savings of 20% in comparison to traditional on-site building construction and can reduce the time required to construct by up to 50%. This is as a result of increased efficiency in fabricating components, a reduction in costs associated with design errors and poor communication, minimizing material waste, labour and rework costs and improving overall scheduling to eliminate clashes or unforeseen issues.

The construction industry is one of the most dangerous industries for workers due to risks associated with working at height, with machinery and heavy materials, and trip, slip and fall hazards. The improvement in worksite safety is a priority across industries. Prefabrication and modular construction can improve conditions for workers and reduce risk by enabling much of the fabrication of components to be undertaken off-site. Therefore, much of the dangerous work is performed in a controlled environment that is specifically designed to enable safety (e.g. permanent scaffolding, tools and equipment kept in a central location which is easily accessible, eliminating the need for workers to work at height on site). Additionally, with the pre-fabrication and modular construction techniques, bad weather conditions which would typically affect the progress of the work on site are eliminated by working indoors. This also eliminates the safety risks associated with poor weather conditions (e.g. rain, fog, ice, wind).

The US and European prefabrication and modular construction market is estimated to be USD 130 billion by 2030 and is estimated to produce an annual saving of USD 22 billion. While the adoption of these construction techniques are expected to increase in the coming years, there are some obstacles that will need to be addressed These include developing off-site warehouse facilities that are fully equipped and capable of performing this function and developing the local expertise to undertake these tasks.

Ongoing technological advancement is likely to see 4D (time) and 5D (cost) modelling functionality developed which will result in further reductions in costs and increases in efficiency. 3D printing could also be utilized for construction which would further reduce any errors associated with human intervention (see also the 3D Printing use case).

Legislation and regulation: Quality certification standards and warranties will be required to give customers confidence in the quality standard of the method. Regulation concerning the transportation of modules can restrict the size of the modules that are able to be transported from the facility to the work site by road. This therefore restricts the scale of the project that can be undertaken. Governments should examine their building codes to drive efficiency across geographic regions and enable faster approval processes by approving designs and production processes rather than requiring inspections for individual sites. Governments can encourage these forms of construction by introducing targets or incentives (as well as sustainability incentives) for public projects to involve off-site manufacturing.

Transition of workforce capabilities: Prefabrication and modular construction will disrupt the existing construction eco-system. This will affect multiple stakeholders including manufacturers, developers, construction firms, investors, and the public sector. Modular manufacturers will need to invest in building skills and expertise including capabilities in design, operations and digital technologies. Partnerships with developers, construction companies and lending providers may be required as existing talent is limited. The ongoing training of the workforce will be essential to ensure manufacturers stay competitive compared to other industries and are able to scale up in response to demand.

Funding and financing: Industries should determine whether the expected cost saving outweighs the capital investment. Public and private investment is necessary, with major private investors (including SoftBank, Google’s parent company Alphabet, and even Amazon) already having invested in prefabrication developments and builders such as Katerra, RAD Urban, and Factory OS. 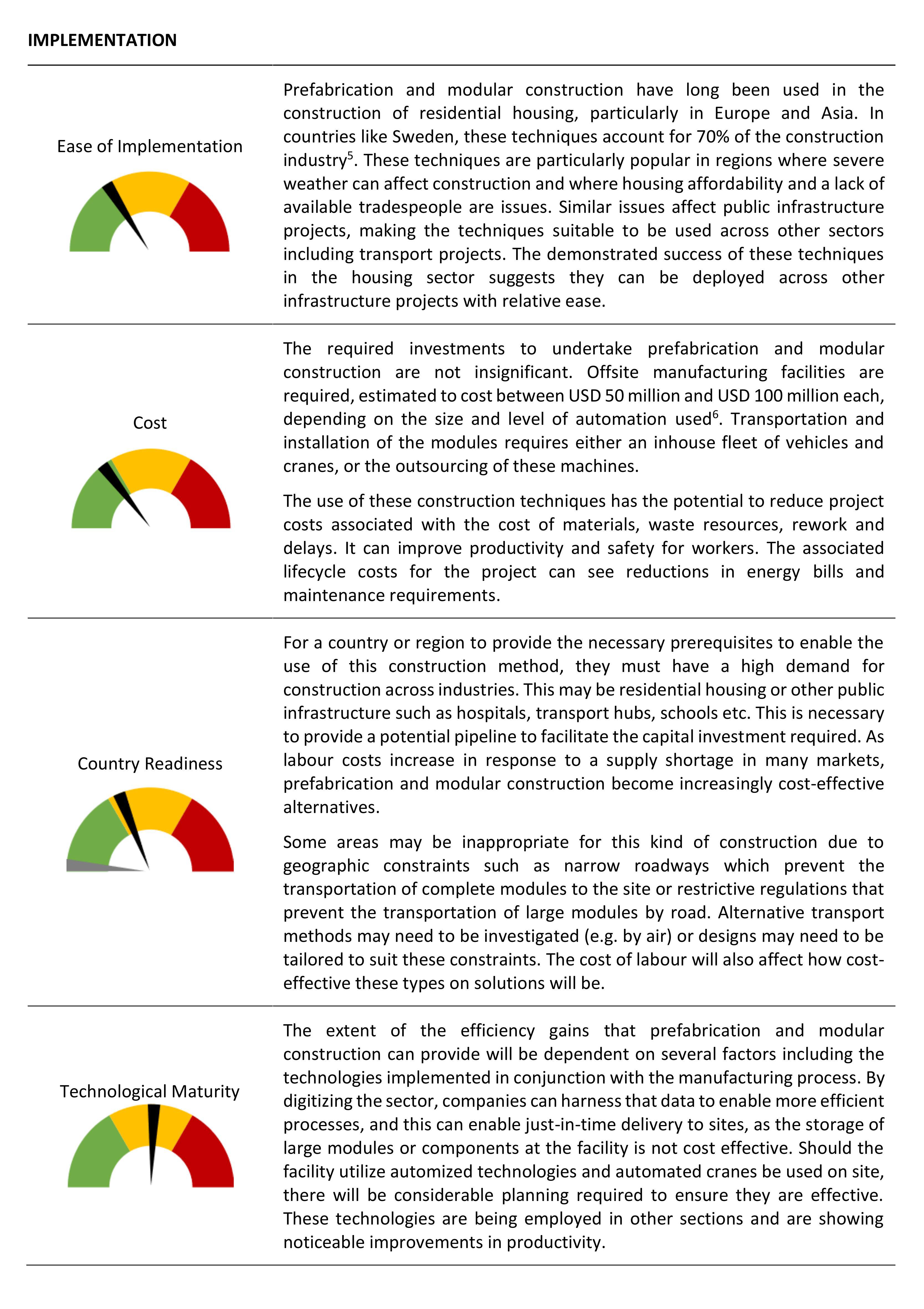 Risk: The market is currently fragmented and unstandardized. Existing operators are small and have limited experience, which has resulted in high lending rates and a high risk of bankruptcy should demand diminish. For the customer, due to the reduced project time, payment could be required upfront rather than staggered over the project term.

Mitigation: As the industry continues to develop and companies can prove their sustainability, it is likely lending in this area will be able to provide access to more cost-effective capital. Business models that consider customer financial restraints will need to be developed that find an appropriate balance between upfront payment and more staggered payments, which is more customary in construction. This may be particularly relevant for public infrastructure projects in which funding may be staggered in line with budgets.

Risk: Public and government perception that prefabricated structures are poor quality cookie-cutter solutions may linger. This could discourage individuals and local authorities from exploring this option.

Mitigation: The benefits associated with the method should be emphasized including the reduction in capital and operating costs as well as potential sustainability improvements.

Risk: Where automated machinery is utilized there is a risk that the system could be hacked due to cybercrime or sabotage. This could result in damage to products or other machinery as well as other damages.

Mitigation: Organizations should ensure their systems are robust to eliminate the risk of cybersecurity breach. Furthermore, governments should set legislative frameworks to outline the requirements of these systems to repel cybersecurity attacks.

Risk: The transportation of modules from the facilities to the construction sites at present is performed by large trucks on roads. This contributes carbon emissions to the environment and can also produce congestion due to the slow-moving vehicles, and difficulties moving through the road network. This would further increase emissions associated with other vehicles in traffic.

Mitigation: Where possible, prefabrication should occur as close to the construction site as possible. In future, developments in transportation should be explored that may enable the transportation of modules by energy efficient road vehicles, or potentially by aerial vehicles.

Implementation: Prefabricated beam segments were used to build a new elevated rail system over a train line whilst enabling train services to continue to run.

Cost: The cost of removing 50 level crossings in Melbourne estimated to be at least AUD $8.3 billion.

Timeframe: The project was announced in 2016 and it was estimated to be operational by 2018. Prefabrication was used to help meet this strict deadline.

Implementation: The components of the station were fabricated offsite.

Cost: The total project (including elimination of the railway level crossing in Nunawading and upgrade of Nunawading station) cost was AUD 140 million.

Timeframe: The installation of Nunawading station was completed entirely overnight during the nominated shutdown period to minimise disruption to the station operation.

Implementation: Pilot project to replace existing bridge in the North Rhine-Westphalian with a new bridge system using modular and prefabrication construction techniques. The system was designed to keep construction-related traffic disruption to a minimum.

Cost: The system was designed so that the existing foundations could remain in the ground reducing the need for lengthy and potentially costly demolition and complex earthworks.

Timeframe: Cut construction time by more than half, down to sixteen weeks from an initial estimate of about twelve months.

Cost: The total project (including elimination the railway level crossing at Mitcham and upgrade of Mitcham Station) cost was AUD 192.

Timeframe: The construction of the whole project started in early 2013 and completion was due mid-2014.

Financial Well-being As A Woman Of Color: Why It’s Critical

The 27 Best Jobs For Stay At Home Moms