Rethinking infrastructure delivery models towards a strategic and agnostic approach

What is a delivery model?

The GI Hub’s Improving Delivery Models (IDM) initiative advocates for an agnostic approach to infrastructure delivery. What does that actually mean?

In principle it means to put a greater attention on the managerial process that allows to consider all the possible solutions, based on a deep analysis of the need and the specificities of a certain country/region.

Too often, the design of the most appropriate solution is set aside because of the dominance of “as-is/business as usual” solutions, imitation approach, the dominance of legal perspective or cultural bias.

With this paper we intend to stimulate a reflection on the key issues to adopt an agnostic approach, even in context where some regulatory rigidity may exist.

A delivery model regards the overall process and decisions to deliver an operating infrastructure.

In practice, the delivery model is designed and developed during the front-end planning phase when the procuring authority defines the overall strategic objectives, shapes the governance structure, scopes the project, decides the funding options (tax/users), secures the financing, and prepares the contracting, procurement, packaging strategy[1].

From an economic point of view, the contractual model refers to the activities that are outsourced and the risks/rewards mechanism included in each contract.

“A fair and reasonable assessment of all possible delivery options including contractual models, enabling the best approach to be chosen for a project.”

Agnostic approaches to delivery and contractual models should start from the features of the project and the goals to be achieved. The choice of contractual model should be the last step of an analytical process in order to select the most appropriate model.

The analytical process is based on some key questions, such as:

The answers to these questions regarding the overall process represent the delivery model.

The degree of involvement of the private sector and the combination of the main activities – design, construction, operation, maintenance, financing – is a matter of contractual model selection. For one project, one combination may be better than another, but all are valid options that need to be assessed fairly and equally.

In addition, the degree of involvement of the private sector will result also in a decision regarding the governance model: in-house or hybrid (see box below).

The governance model is related to which level of government is procuring the project or service. The spectrum of models is below. 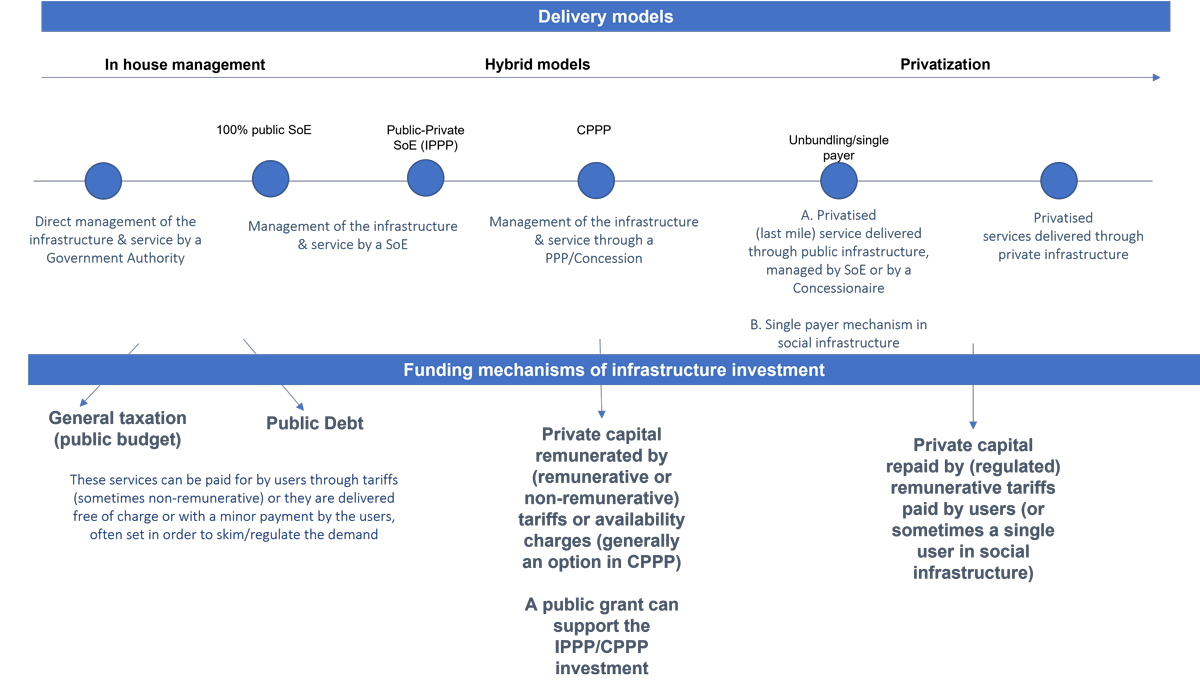 The in-house model consists in the direct involvement of the (local or state level) government or other public sector entities. When improved efficiency is required, a more entrepreneurial and flexible approach to deliver infrastructure, without the hurdles of privatisation, the state-owned enterprise (SoE) model can be a reasonable choice. However, because SoEs are often bounded by too many goals, in practice it is very difficult to replicate the discipline and performance of private companies.

In the middle there are hybrid models, different forms of public-private partnerships, which can take the form of institutional PPP (IPPP) – joint venture/mixed companies – or contractual PPP/concession (CPPP).

If the IPPP has been considered in some jurisdictions a valuable idea, able to regulate the partnership from within, with a relational (as opposite to contractual) approach to governance, the adoption of this model has shown some relevant drawbacks, due to the difficulties to embody under a single governance structure two opposite goals.

The CPPP manages the balance between public goals and the private profitability, by leveraging on a system of complex and hard to design incentives, generally related to the capacity to achieve certain results and manage the related risks. Also CPPP have generated mixed results, due to the difficulties in the design of value for money and enforced contracts.

Lastly, there is the privatization option. The privatization can be enacted on an asset or, better and more often, on a state-owned company which manages asset(s). The (full or partial) privatization of state own enterprises in charge of managing certain public services is a policy decision in the search for more efficiency and more capital to be deployed in the expansion of a country’s infrastructure network.

Privatization and PPP often coexist across countries and industries, especially in some sectors, such as energy, telecommunication, transport. Indeed, it was and it is not rare to see a whole (or partial) sale of SoEs to private investors (to attract more capital, to foster competition and to inject more efficiency), which then become potential concessionaires of public assets if they get a (PPP) contract awarded for the management of the asset (or in other terms for the delivery of the service) or for expanding and managing the network.

However, the reality is that often the choice of contractual model is hamstrung by ideological positions (or dominant or historic practices in some jurisdictions) that compromise development of an effective delivery model. In many cases the choice is influenced by the budget available (or not available) and the decision process boils down to mere legal issues regarding the selection of market players, thus skipping fundamental issues to be considered.

Indeed, many of the improvements highlighted within the IDM framework can’t be practically adopted in some markets due to a combination of these issues, namely legal, regulatory, legislative or budgetary restrictions, and/or engrained operational bias. These issues vary and change depending on the ‘level’ being looked at in the infrastructure ecosystem. These being:


It is therefore important to explore and highlight what these contextual elements are and propose the ideal scenario.

Two that are particularly common at a Governmental level are the funding, financing and budgetary decisions, and the procurement rules and regulations. Both of these demonstrate elements that can force procuring agencies to fit a square peg (project) in a round hole (contractual model).

The financing decision often highjacks the choice of a contractual model. In some jurisdictions, explicitly or implicitly, the PPP is the main (if not the sole) contractual model that authorizes the use of private capital (as opposed to publicly funded projects under traditional public procurement).

[This has been a real challenge for some public contracting authorities when they are particularly vulnerable financially. In many cases the financing decision and resulting contractual model selection has been criticized, especially if the value for money was not demonstrated. This is especially exacerbated, in jurisdictions (commonly sub national ones) that have ceiling imposed on their borrowing capacity. Many of these jurisdictions have infrastructure backlogs which require a large outlay of capital yet have limited budget capacities or taxation revenues.]

In this context, utilising private capital to finance public projects is in many cases the only option available to deliver needed infrastructure. Hence a PPP-type approach is the main (if not sole) contractual model that enables private capital. Therefore, the relevant question for infrastructure practitioners and policy makers in these jurisdictions is primarily how to make a PPP work, as it’s the only way they can finance a project.

To answer this question, governments and the private sector should consider the same fundamental ingredients to structure a well-balanced PPP contract. Among these ingredients, the most relevant are: what risks to be allocated to the private sector? What are the boundaries (what to include in) of the PPP contract? What is the suitable payment mechanism? How to deal with technological refresh? What kind of public mechanisms could be useful to attract private capital without reducing the incentives to achieve the PPP strategic goals?

What is needed is a flexible approach where the public contracting authority should be able to have the option to mix public and private capital to finance its infrastructure.

“Adopt a clear, agnostic approach to contract model selection using professional assessments, market input and sound decisionmaking parameters. An agnostic approach toward delivery strategies and an unbiased budget comparison process will yield better project outcomes. The contractual model should be viewed as a functional instrument to service the project owner’s requirements, not to restrict it.”[1]

In a similar vein, some governments procurement legislation may introduce some specific rules that may restrict the design of the delivery model.

For example, the EU regulation, which is one of the most advanced for public contracts, two frameworks are specified for delivering infrastructure investments: the traditional procurement and the concession model. Since a concession is based on the allocation of (an operating) risk to the private counterpart (Directive 2014/23/UE), so that it may not be able to recoup the investment done or the cost incurred, a concession contract can be considered as a PPP (Vecchi et al. 2021).

In such cases, the IDM process can still be applied. Indeed, also in this context, it is fundamental to adopt an agnostic approach, to consider all the questions of the IDM and on the basis of the answers to design the contract, which will fall ultimately within a procurement or a concession contract. In this respect the EU directives do not represent a constraint, but, on the contrary, they should come after a strategic decisionmaking process.

The contract is an instrumentum at the service of the project and therefore its design should be the result of the IDM. Contract as a function where each element can be chosen to fit the project (and not the way around).

Therefore, the IDM approach can be equally applied in civil and common law frameworks, what is relevant in the former is the recognition of the need of a managerial approach in the planning phase and the fact that the legal framework represent only a part (the final one) to be considered in the decisional process.

When things go wrong the contractual model is the scapegoat. Yet in many cases the model chosen is the best of those available based on the restrictions imposed on infrastructure delivery for that project. However, a good planning and design phase also need a robust implementation phase, based project management principle, also when the decision is to implement a bundled/PPP contract. Execution is also fundamental to support a circular learning process in order to improve the overall process.

“The contract should be ‘instrumentum’ – an instrument to serve and support the project owner’s needs, not the other way around. The overreliance on the contractual model to solve a poorly planned and scoped project is a ‘vue de l’esprit’.” [1]

To improve infrastructure delivery, governments need to not just improve the process. They also need to reform the enabling legal, regulatory, legislative and budgetary environment to realise the full potential of improvements to the delivery of infrastructure.

Fall Decor at My Sister's House in Virginia