A novel grease trap collection system for the harvesting and removal of problematic fat, oil and grease (FOG) waste build-up at the commercial, industrial and municipal wastewater premises. It uses oleophilic (oil-attracting) and hydrophobic (water-repelling) technology to increase the capture of FOG for better management of waterways. The harvested FOG waste can also be more effectively managed, including by being converted into high-quality biodiesel feedstock.

FOG is the primary influencing factor of sewer overflows, with hundreds of thousands of incidents per year globally. Inconsistent installations of correctly-sized grease traps combined with infrequent maintenance, results in FOG waste being released into the sewers, which can deposit on the pipe’s surface and solidify as it cools over time, causing pipe clogging. In addition, there has traditionally been no positive value chain created for the application of collected FOG waste other than sending to landfills which could impose environmental and health problems.

All wastewater effluent coming from food establishment sink drains or other FOG producing sources can be intercepted before entering the sewer networks, preventing FOG build-up which can lead to sewer blockage and overflow. Traditionally FOG is captured in grease traps which are periodically emptied and then sent to landfill or other recycling facilities.

This new technology increases the capture rate of FOG in the grease trap and reduces the unnecessary transport of water. In addition, the usage of high-value FOG feedstock can divert from the disposal route of conventional landfills to energy recovery. The repurposing of FOG into biodiesel is performed at a processing plant where impurities are removed to ready the FOG for chemical biodiesel production process. FOG can be an attractive alternative feedstock for biofuel production to meet the energy recovery needs from renewable sources. For example, analysis in the USA shows that waste to energy technologies converting FOG and other waste feedstocks to biofuel could potentially provide 26% of aviation fuel needed in the USA[1].

Legislation and regulation: This solution requires a compliance driver to enforce FOG interception. Governments should enact a national/regional standard and policy for trade waste discharge and penalties. The establishment of FOG management programmes can streamline the regulations for grease trap design, installation and servicing requirements. Governments can provide incentives to reward wastewater utilities for promoting a circular economy.

Transition of workforce capabilities: Recycling programs are typically associated with plastic, paper, and cardboard. FOG is a low priority product to be recycled into valuable products. Educating the public and commercial and industrial producers on the potential of FOG recycling and the benefits of a circular economy is essential to accelerate the shift to sustainable FOG and biodiesel infrastructure. 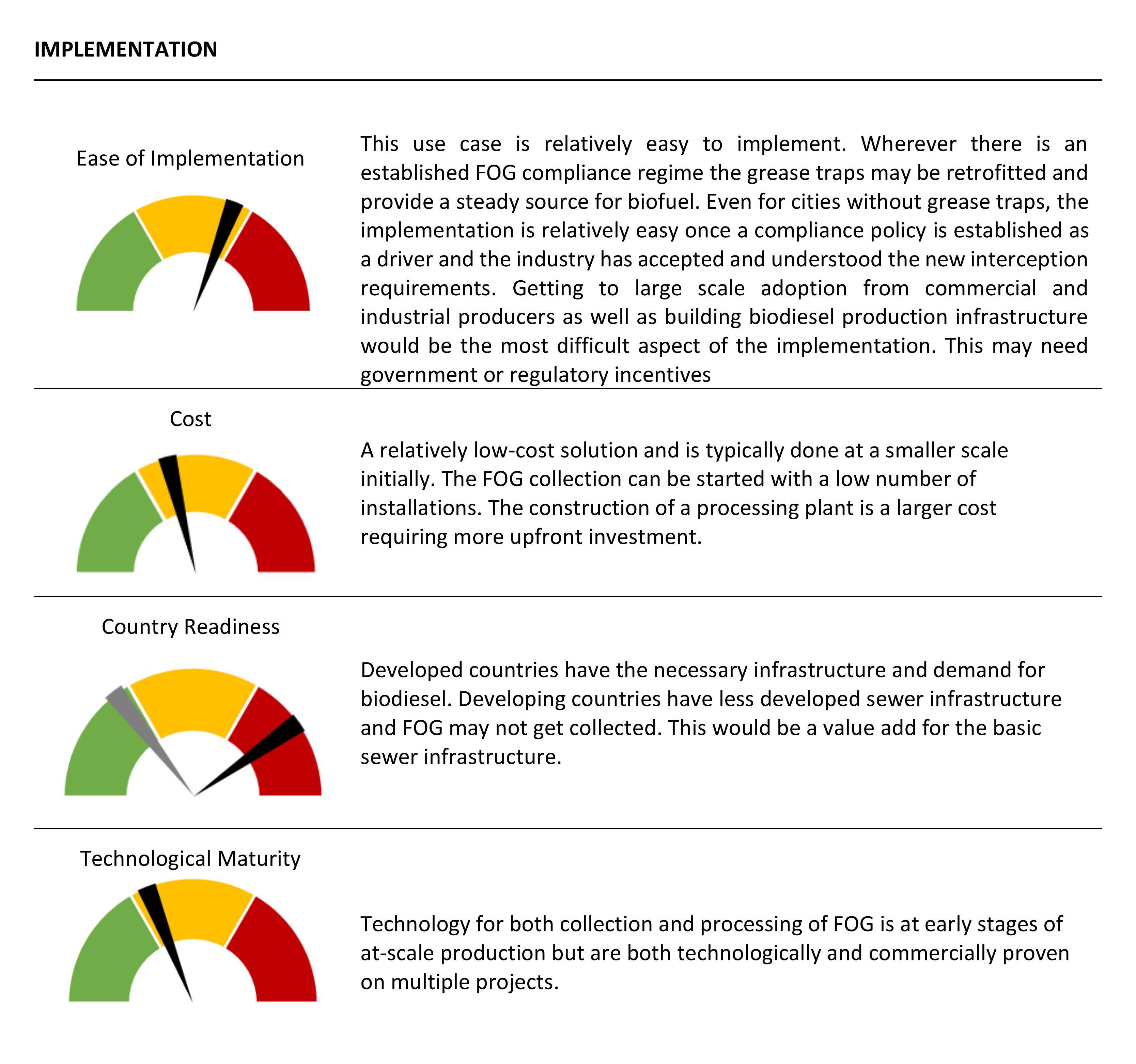 Risk: Variable quality of wastewater streams due to larger items such as rags, cotton and other debris could potentially clog the equipment and decrease the removal efficiencies.

Mitigation: Pre-processing equipment to have first-pass screening in place to remove unwanted debris.

Risk: Lack of FOG management initiatives. There can also be inherent limited flexibility of introducing new solutions and changes to the existing FOG service standards that may slow down the overall adoption across the wastewater supply chain. A resulting lack of financial incentive or government support to implement the technology will inhibit wastewater utilities and their customers from making changes to their existing grease traps

Mitigation: Drivers need to be created through government and regulatory policies that provide commercial incentives to shift towards higher FOG standards.

Risk: Turning waste into biodiesel is a new market. General scepticism about the tangible benefits of biodiesel production over the incumbent method of direct landfill disposal.

Mitigation: Education on the environmental advantages and commercial case of biodiesel.

Implementation: In Sydney Australia, PumpFree are rolling out the technology to a globalrestaurant chain with over 180 sites in the region. They will be deploying to Victoria and Queensland later this year.

Cost: The technology reduces Biochemical Oxygen Demand (BOD), FOG and Suspended Solids to sewer by 54%, 75% and 65% respectively, reducing the load for downstream wastewater treatment plants. Increases the availability of high-quality waste feedstock which is lower priced than traditional UCO or tallow to the biofuel industry (approx. 2 tonnes per site per annum).

Timeframe: The roll out on the 180 sites will take approximately 3-4 months.

Implementation: Argent Energy constructed a which is the first of its kind biodiesel production plant in Europe, will process up to 250,000 tonnes of waste fats and oils into around 85 million litres of biodiesel a year. Biodiesel made from waste can produce 90 per cent fewer greenhouse gas emissions compared to fossil fuels.

Timeframe: Construction started in 2016 and the plant is fully operation.

The role of Bitcoin Exchange in Bitcoin trading

30 Pretty Swimsuits That Are Just Begging for Compliments

6 Crucial Ones for Ecommerce

What needs to be done to decarbonise the transport sector?

How To Create A Financially Sound Plan For Yourself!

What Is Market Rotation and How to Use It to Your Advantage?