Waste is treated very differently around the world. At one extreme, some countries such as Turkey send more than 85% of their municipal waste to landfill, while others such as Germany recycle, compost, or incinerate 100% of their municipal waste. Globally, a significant volume of waste is currently being incinerated or disposed of in landfill, when it could instead be reused or recycled. A “waste marketplace” provides digital infrastructure to enable higher rates of reuse and recycling.

Global material consumption is increasing, with growing population and affluence leading to more waste generation and resource extraction. In recent years, many countries and organisations have set goals to reduce the amount of waste that goes to landfill. Of these, perhaps the most recognisable is Goal 12 of the Sustainable Development Goals (SDGs) created by the United Nations: “Responsible consumption and production.” Of particular interest is Target 5 in Goal 12: “By 2030, substantially reduce waste generation through prevention, reduction, recycling and reuse”.

A significant component of waste is from the commercial and industrial sectors. This commercial and industrial waste can comprise of many different materials including metals, food, garden organics, cardboard, paper, plastic, glass, and masonry4. These by-products are considered waste by the companies producing them, however, there are often other companies (potentially in a different industry) that would consider that very same by-product to be a resource. Unfortunately, it is very unlikely for the company producing the waste to have any interaction with the company that would consider the waste to be a resource.

If one company’s waste is another’s resource, both companies may benefit economically by transferring this material from the former to the latter. In some instances, the former may be paying to dispose of their waste and would be able to instead sell the waste. The latter company who considers the waste to be a resource may be able to purchase this material at a lower cost.

How do these companies find each other and recognise the potential economic benefits? A waste marketplace enables companies to provide information about their by-products and required resources and find other companies that consider their by-product as a resource or vice versa.

Such a marketplace requires significant coordination and networking. Previous attempts at building such marketplaces have sometimes failed for a number of reasons including a lack of industry awareness, information privacy and confidentiality concerns, and the passive nature of a marketplace. However, there are some examples of successful waste marketplaces, which often make good use of a variety of techniques, including keeping marketplace content current, providing updates to users, and working with peak industry bodies5.

Transition of workforce capabilities: Many organisations, particularly small and medium enterprises (SMEs), will not have someone looking for alternative sources of materials. There will be many instances where a company could make use of someone else’s by-product, but with some modification to existing processes, requiring a greater level of workforce capability in procurement. For example, a road maintenance company could switch from using asphalt to using asphalt which incorporates recycled materials, but they may need to use slightly different equipment, and this would require a higher level of technical competency than regular procurement. 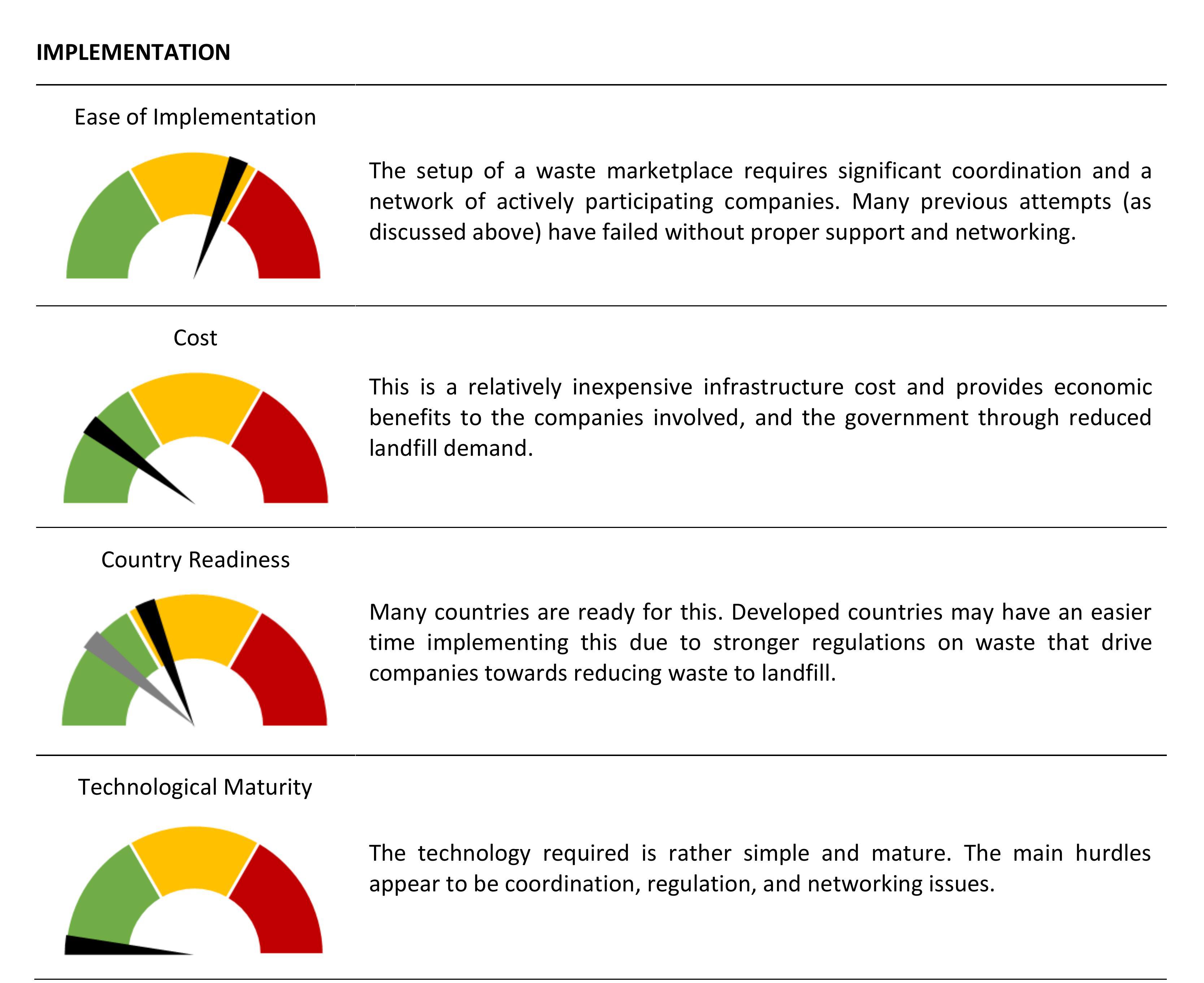 Risk: There is a risk that a waste marketplace will not “stick”. As previously mentioned, previous attempts at building such marketplaces have sometimes failed for a number of reasons including a lack of industry awareness, information privacy and confidentiality concerns, and the passive nature of a marketplace4,5.

Mitigation: The waste marketplaces that have been most successful have utilised a variety of techniques, including keeping marketplace content current, providing updates to users, and working with peak industry bodies and government authorities.

Risk: Previous attempts have failed when companies are not engaged in the marketplace.

Risk: Some information may be considered confidential. For example, if companies are required to list the quantities of by-products, some other companies may find that information to be useful for estimating production outputs. This data may be required by the marketplace to help match companies together.

Mitigation: Modern cybersecurity provides many solutions to this problem that can prevent this information from being accessed by the wrong users of the marketplace.

Cost: From 6 example matches, it was estimated that waste cost was reduced by $60,000 per year, and resource input costs were reduced $13,500 per year.

Timeframe: To build ASPIRE from scratch took less than 2 years, and had more than 100 companies registered within 6 months of going live.

15 Personal Growth Questions To Ask Yourself

How It Works, Pros & Cons